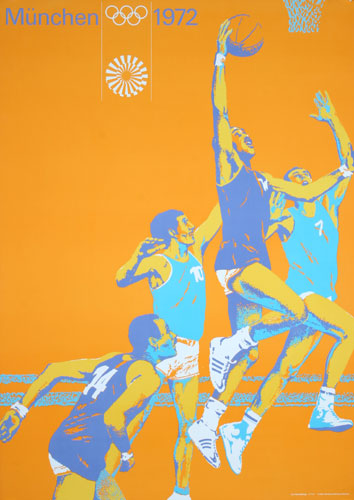 History Today: Basketball was invented in 1891
On this day in 1891, the game of basketball was created by Dr. James Naismith in Springfield, Massachusetts. Naismith wrote the sport’s original 13 rules to create a game that could be played in YMCA gyms during the cold winter months. Initially, teams were made up of nine players attempting to toss a soccer ball into peach baskets secured to the balconies at the ends of a gymnasium. When a basket was made, the game was paused while a man with a ladder had to retrieve the ball. Following the first public matches in 1892, popularity of the new game spread quickly. The first intercollegiate match was played in 1895 and the first professional league was founded in 1898.  Nets did not replace the sport’s original peach baskets until 1905.
Inquiries via posterconnection.com.
#Basketball #PosterArt #VintagePoster #VintagePosters #vintage #art #graphic #graphics #posterconnection #originalposter #vintagefinds #vintagedecor #graphicdesign https://goo.gl/YC5rQA https://goo.gl/GXcrV8