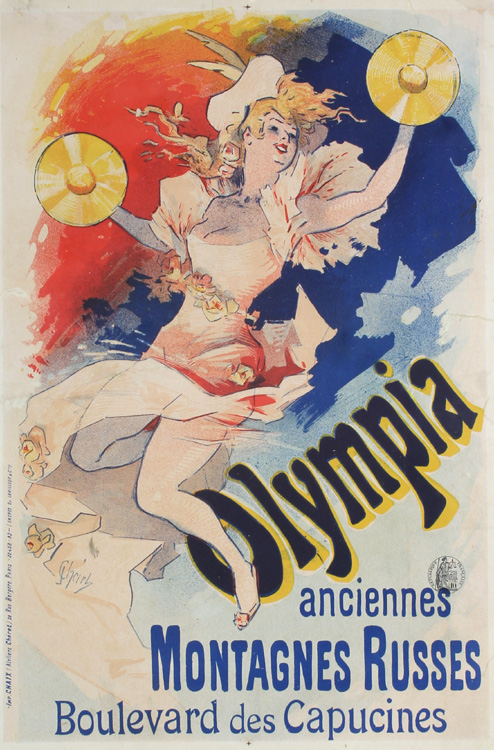 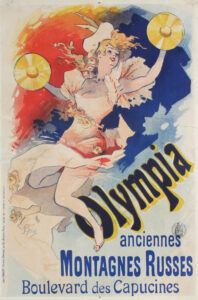 Jules Chéret, (born May 31, 1836, Paris, France—died September 23, 1932, Nice), was a French poster illustrator and graphic designer who has been called “the father of the modern poster.” After apprenticing as a lithographer from 1849 and studying drawing, Chéret received his first major poster commission in 1858 for Jacques Offenbach’s operetta Orpheus in the Underworld (1858). From 1859 to 1866 he designed posters and book jackets in London where he was strongly influenced by the British approach to poster design and printing. On returning to France, Chéret created vivid poster ads for the cabarets, music halls, and theaters such as the Eldorado, the Olympia, the Folies Bergère, or the Moulin Rouge. He created posters and illustrations for the satirical weekly Le Courrier français. In 1895, Cheret created the Maîtres de l’Affiche collection, a significant art publication of smaller sized reproductions featuring the best works of ninety-seven Parisian artists. His success inspired an industry that saw the emergence of a new generation of poster designers and painters such as Charles Gesmar and Henri de Toulouse-Lautrec. One of his students was Georges de Feure. In his old age Cheret retired to the pleasant climate of the French Riviera at Nice. He died in 1932 at the age of 96. Cheret was awarded the Légion d’honneur by the French Government in 1890 for his outstanding contributions to the graphic arts. Although his paintings earned him a certain respect, it was his work creating advertising posters, taken on just to pay his bills but eventually his dedication, for which he is remembered today. Source: wikipedia.org.