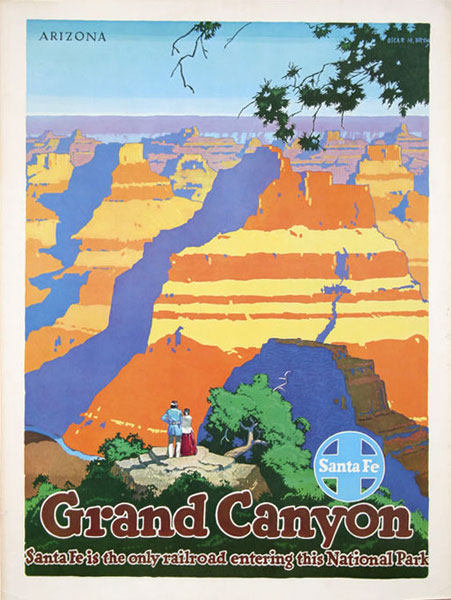 Today in History: Grand Canyon declared National Monument in 1908
112 years ago today, U.S. President Theodore Roosevelt declares the massive Grand Canyon in northwestern Arizona a national monument.
Though Native Americans lived in the area as early as the 13th century, the first European sighting of the canyon wasn’t until 1540, by members of an expedition headed by the Spanish explorer Francisco Vasquez de Coronado. Because of its remote and inaccessible location, several centuries passed before North American settlers really explored the canyon. In 1869, geologist John Wesley Powell led a group of 10 men in the first difficult journey down the rapids of the Colorado River and along the length of the 277-mile gorge in four rowboats.
By the end of the 19th century, the Grand Canyon was attracting thousands of tourists each year. One famous visitor was President Theodore Roosevelt, a New Yorker with a particular affection for the American West. After becoming president in1901 after the assassination of President William McKinley, Roosevelt made environmental conservation a major part of his presidency. After establishing the National Wildlife Refuge to protect the country’s animals, fish and birds, Roosevelt turned his attention to federal regulation of public lands. Though a region could be given national park status–indicating that all private development on that land was illegal–only by an act of Congress, Roosevelt cut down on red tape by beginning a new presidential practice of granting a similar “national monument” designation to some of the West’s greatest treasures.
In January 1908, Roosevelt exercised this right to make more than 800,000 acres of the Grand Canyon area into a national monument. “Let this great wonder of nature remain as it now is,” he declared. “You cannot improve on it. But what you can do is keep it for your children, your children’s children, and all who come after you, as the one great sight which every American should see.”
Congress did not officially outlaw private development in the Grand Canyon until 1919 when President Woodrow Wilson signed the Grand Canyon National Park Act. Today, more than 5 million people visit the canyon each year. The canyon floor is accessible by foot, mule or boat, and whitewater rafting, hiking and running in the area are especially popular. Many choose to conserve their energies and simply take in the breathtaking view from the canyon’s South Rim–some 7,000 feet above sea level–and marvel at a vista virtually unchanged for over 400 years. Source: www.history.com.
For inquiries, email posterconnection@gmail.com.
#GrandCanyon #PosterArt #VintagePoster #VintagePosters #vintage #art #paper #graphic #graphics #artoftheday #picofhteday #fun #cool #posterconnection #originalposter #vintagefinds #interiordesign #vintagehome #vintagedecor #graphicdesign #designporn https://goo.gl/YC5rQA https://goo.gl/GXcrV8