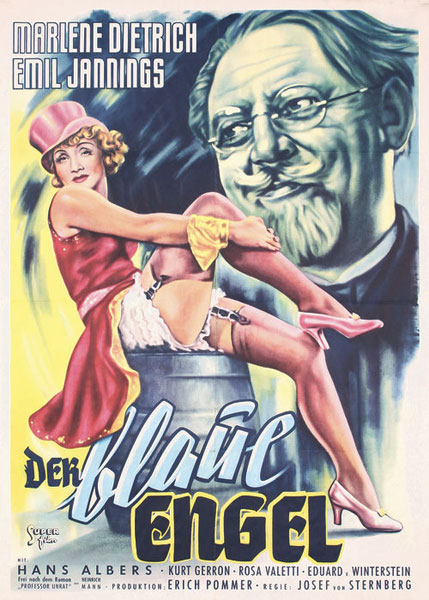 Today in History: The Premiere of the “Blue Angel”
89 years ago today, the German movie Der Blaue Engel (The Blue Angel) celebrated its premiere in Berlin and introduced the world to a new movie star, Marlene Dietrich. The opening was completely sold out, possibly helped by rumors that the movie may not have been allowed to be shown at all due to its disreputable plot: a disciplinarian professor falling for a cabaret singer.
Josef von Sternberg was brought in from Hollywood to be the film’s director; Emil Jannings, who had just won an Oscar, was hired to play the professor. But filling the role of cabaret singer Lola-Lola turned out to be more problematic. Sternberg wanted Metropolis star, Brigitte Helm but she was booked; Jannings preferred theater singer Lucie Mannheim but Sternberg considered her too serious. Author Heinrich Mann would have liked to have seen his girlfriend Trude Hesterberg in the role but she was not sufficiently well-known.
Enter Marlene Dietrich. Supposedly, Sternberg was immediately fascinated by this inexperienced woman from a local drama school. It seems that the young Dietrich embodied Lola-Lola, a seductress with the longest legs and the right smile. It is said that Dietrich did not even prepare a song for her first audition, telling Sternberg that she assumed she would not be seriously considered for the role. Her flippant behavior intrigued the director and because Dietrich was behaving like the film character Lola Lola, she was hired.
Nobody could have predicted the film’s enormous success. A new star was born and immediately following the triumphant premiere in Berlin, the blue angel and her director went off to pursue a career in Hollywood.
For inquiries, email posterconnection@gmail.com.
#MarleneDietrich #VintagePoster #VintagePosters #vintage #art #poster #posters #design #graphicdesign #paper #graphic #graphics #originalposter #artoftheday #picofhteday #fun #cool #posterconnection #vintagefinds #interiordesign #vintagehome #vintagedecor #designporn https://goo.gl/YC5rQA https://goo.gl/GXcrV8