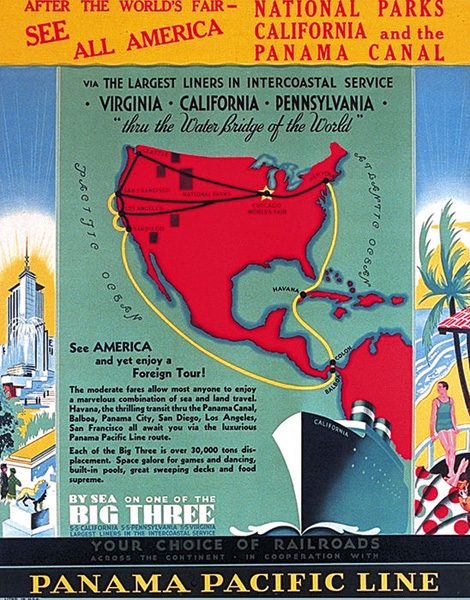 Today in History: Opening of the Panama Pacific International Exposition in San Francisco in 1915
104 years ago today, the Panama-Pacific International Exposition opened its doors to the public. This 1915 “World’s Fair” celebrated the completion of the Panama Canal, the discovery of the Pacific Ocean 400 years prior, and San Francisco’s reconstruction following the great earthquake of 1906. The exposition continued through December 4, 1915 and was considered a huge economic success, helping the entire Bay Area getting back on its feet. The fair covered an area of 76 city blocks (630 acres) where hundreds of buildings featured exhibits related to industry, modernization and the arts. Among the exhibits were the first steam locomotive, purchased by Southern Pacific Railroad, and the Liberty Bell (taken by train from Philadelphia). The expo’s centerpiece was the Tower of Jewels, a structure standing 43 stories tall and covered with more than 100,000 free-swinging bits of cut glass “jewels.” Most attractions were taken down in late 1915. The Palace of Fine Arts was the only surviving building on the Expo grounds and has been completely reconstructed in the 1960s.
For inquiries, email posterconnection@gmail.com. #PanamaPacific #PosterArt #VintagePoster #VintagePosters #vintage #art #paper #graphic #graphics #artoftheday #picofhteday #fun #cool #posterconnection #originalposter #vintagefinds #interiordesign #vintagehome #vintagedecor #graphicdesign #designporn https://goo.gl/YC5rQA https://goo.gl/GXcrV8