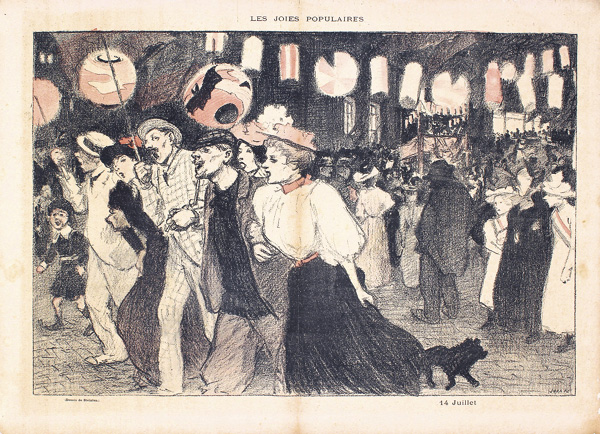 Today in History: Theophile Steinlen born in 1859
Theophile Alexandre Steinlen (November 10, 1859 – December 13, 1923) was a Swiss-born French Art Nouveau painter and printmaker. Steinlen studied at the University of Lausanne before taking a job as a designer trainee at a textile mill in Mulhouse in eastern France. In his early twenties, he moved to the artistic community in Paris where he was befriended by the painter Adolphe Willette. The latter introduced him to the artistic crowd at Le Chat Noir that led to his commissions to do poster art for the cabaret owner/entertainer, Aristide Bruant and other commercial enterprises. Steinlen had hist “poster breakthrough” with his work for the cabaret artists Mothu  et Doria (1893); one of his best known images was “Lait pur Sterilise” (1894). Steinlen became a regular contributor to Le Rire and Gil Blas magazines plus numerous other publications including L’Assiette au Beurre and Les Humouristes. Between 1883 and 1920, he produced hundreds of illustrations, a number of which were done under a pseudonym so as to avoid political problems because of their harsh criticisms of societal ills. Steinlen died in 1923 in Paris and was buried in the Cimetière Saint-Vincent in Montmartre.
For inquiries, email posterconnection@gmail.com.
#Steinlen #PosterArt #VintagePoster #VintagePosters #vintage #art #paper #graphic #graphics #artoftheday #picofhteday #fun #cool #posterconnection #originalposter #vintagefinds #interiordesign #vintagehome #vintagedecor #graphicdesign #designporn https://goo.gl/YC5rQA https://goo.gl/GXcrV8