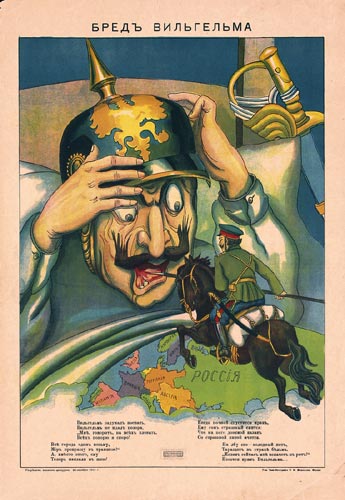 First World War erupts in Europe in 1914
On August 1, 1914, four days after Austria-Hungary declared war on Serbia, two more great European powers—Russia and Germany—declare war on each other; the same day, France orders a general mobilization. The so-called “Great War” that ensued would be one of unprecedented destruction and loss of life, resulting in the deaths of some 20 million soldiers and civilians and the physical devastation of much of the European continent.
The event that was widely acknowledged to have sparked the outbreak of World War I occurred on July 28, 1914, when Archduke Franz Ferdinand, heir to the Austro-Hungarian Empire, was shot to death with his wife by the Bosnian Serb nationalist Gavrilo Princip in Sarajevo. Over the weeks that followed, Austria-Hungary blamed the Serbian government for the attack, hoping to use the incident as justification for settling the problem of Slavic nationalism in the tumultuous Balkans region once and for all. However, as Russia supported Serbia, an Austria-Hungary declaration of war was delayed until its leaders received assurances from German leader Kaiser Wilhelm II that Germany would support their cause in the event of a Russian intervention. This assurance came on July 5; Austria-Hungary subsequently sent an ultimatum to the Serbian government on July 23 and demanded its acceptance within two days at the risk of war. Though Serbia accepted all but two of the ultimatum’s terms, and Russia declared its intention to back Serbia in the case of such a conflict, Austria-Hungary went ahead with its war declaration against Serbia on July 28, one month after the assassinations.
With that declaration, the tenuous peace between Europe’s great powers was shattered: Germany warned Russia, still only partially mobilized, that to continue to full mobilization against Austria-Hungary would mean war with Germany. While insisting that Russia immediately halt mobilization, Germany began its own mobilization; when the Russians refused the German demands, Germany declared war on the czarist empire on August 1. That same day, Russia’s ally, France, long suspicious of German aggression, began its own mobilization, urging Great Britain—the third member, along with France and Russia, of the Triple Entente alliance—to declare its support. A divided British government declined to do so initially, but events soon precipitated Britain’s move towards war as well. On August 2, the first German army units crossed into Luxembourg as part of a long-planned German strategy to invade France through neutral Belgium. France and Germany declared war against each other on August 3; that night, Germany invaded Belgium, prompting Great Britain to declare war on Germany.
For the most part, the people of Europe greeted the outbreak of war with jubilation. The great majority of people—within government and without—assumed that their country would be victorious within months, and could not envision the possibility of a longer conflict. By the end of 1914, however, well over a million soldiers of various nationalities had been killed on the battlefields of Europe, and there was no final victory in sight for either the Allies or the Central Powers. On the Western Front—the battle line that stretched across northern France and Belgium—the combatants settled down in the trenches for a terrible war of attrition, which would continue, in Europe and other corners of the world, for the next four years.
http://www.history.com/this-day-in-history/first-world-war-erupts-in-europe
Inquiries about this original, vintage poster at posters@posterconnection.com
#WorldWarI #WorldWar #VintagePoster #VintagePosters #vintage #originalposter #poster #posters #design #graphicdesign #art #paper #graphic #graphics #artoftheday #picofhteday #fun #cool #posterconnection #vintagefinds #interiordesign #vintagehome #vintagedecor #designporn https://goo.gl/YC5rQA https://goo.gl/GXcrV8