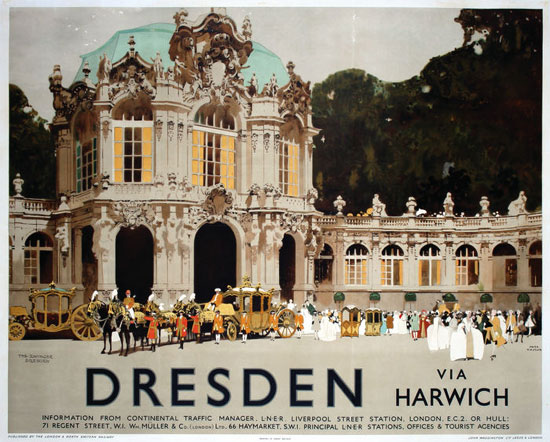 Today in History: Bombing of Dresden in 1945
73 years ago today, a series of Allied firebombing raids begins against the German city of Dresden, reducing the “Florence of the Elbe” to rubble and flames, and killing as many as 135,000 people. It was the single most destructive bombing of the war—including Hiroshima and Nagasaki—and all the more horrendous because little, if anything, was accomplished strategically, since the Germans were already on the verge of surrender.
Among the conclusions reached at the February 1945 Yalta Conference of the Allied powers was the resolution that the Allies would engage in concerted strategic bombing raids against German cities known for war-production and manufacturing, in an effort to bring the Nazi war machine to a crashing halt. The tragic irony of the raid on Dresden, a medieval city renowned for its rich artistic and architectural treasures, is that during the war it had never been a site of war-production or major industry. Both Allies and Germans alike have argued over the real purpose of the firebombing; the ostensible “official” rationale was that Dresden was a major communications center and bombing it would hamper the German ability to convey messages to its army, which was battling Soviet forces at the time. But the extent of the destruction was, for many, disproportionate to the stated strategic goal—many believe that the attack was simply an attempt to punish the Germans and weaken their morale.
More than 3,400 tons of explosives were dropped on the city by 800 American and British aircraft. The firestorm created by the two days of bombing set the city burning for many more days, littering the streets with charred corpses, including many children. Eight square miles of the city was ruined, and the total body count was between 35,000 and 135,000 (an approximation is all that was possible given that the city was filled with many refugees from farther east). The hospitals that were left standing could not handle the numbers of injured and burned, and mass burials became necessary. Source: www.history.com.
#Dresden #PosterArt #VintagePoster #VintagePosters #vintage #art #paper #graphic #graphics #artoftheday #picofhteday #fun #cool #posterconnection #originalposter #vintagefinds #interiordesign #vintagehome #vintagedecor #graphicdesign #designporn https://goo.gl/YC5rQA https://goo.gl/GXcrV8