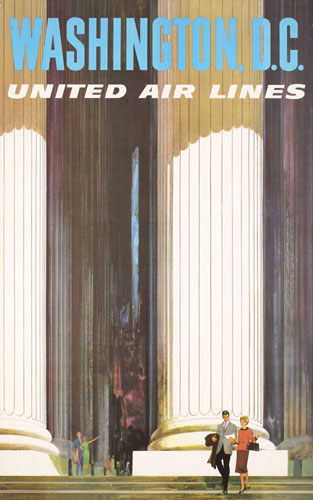 Today in History: Washington DC declared capital of the United States
227 years ago today, the young American Congress declares that a swampy, humid, muddy and mosquito-infested site on the Potomac River between Maryland and Virginia will be the nation’s permanent capital. “Washington,” in the newly designated federal “District of Columbia,” was named after the leader of the American Revolution and the country’s first president: George Washington. It was Washington who saw the area’s potential economic and accessibility benefits due to the proximity of navigable rivers.
George Washington, who had been in office just over a year when the capital site was determined, asked a French architect and city planner named Pierre L Enfant to design the capital. In 1793, the first cornerstones of the president’s mansion, which was eventually renamed the “White House,” were laid. George Washington, however, never lived in the mansion as it was not inhabitable until 1800. Instead, President John Adams and his wife Abigail were the White House’s first residents. They lived there less than a year; Thomas Jefferson moved in in 1801.
Source: www.history.com/this-day-in-history/
Inquiries about this original, vintage poster at posters@posterconnection.com
#Washington #VintagePoster #VintagePosters #vintage #originalposter #poster #posters #design #graphicdesign #art #paper #graphic #graphics #artoftheday #picofhteday #fun #cool #posterconnection #vintagefinds #interiordesign #vintagehome #vintagedecor #designporn https://goo.gl/YC5rQA https://goo.gl/GXcrV8