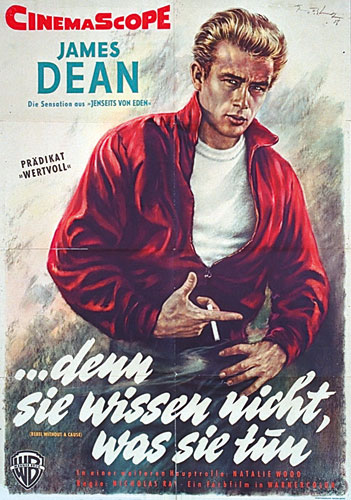 Today in History: James Dean dies in 1955
61 years ago today, young Hollywood film star James Dean was killed in a head-on collision car accident in California. The 24-year old actor was behind the wheel of his Porsche sports car and was dead upon arrival at the hospital. Dean’s mechanic, a passenger in the car, got badly injured but survived the crash. The driver of the other car suffered only minor injuries. Dean had received a speeding ticket just two hours before. Although only one of Dean’s movies, “East of Eden,” had been released at the time of his death, the young actor had already become an idol for the younger generation. Dean had finished filming “Giant” only the day before his accident. Both “Rebel without a Cause” and “Giant” opened shortly after the actor’s death. His brief career and violent death transformed him into a legend. James Dean was the first actor to receive posthumous Academy Award nominations for Best Actor for his roles in “East of Eden” and “Giant.”
#JamesDean #PosterArt #VintagePoster #VintagePosters #vintage #art #paper #graphic #graphics #artoftheday #picofhteday #fun #posterconnection #originalposter #vintagefinds #interiordesign #vintagehome #vintagedecor #graphicdesign #designporn https://goo.gl/YC5rQA https://goo.gl/GXcrV8