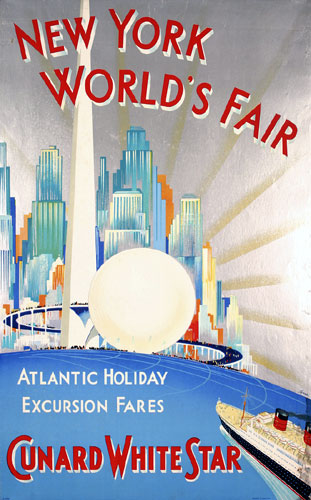 Today in History: 1939 New York World’s Fair
On April 30, 1939, the New York World’s Fair opened its doors to the public. Using the motto “Building a World for Tomorrow,” the opening ceremony featured a speech by President Franklin D. Roosevelt and was broadcast live on television, an event that would have significant consequences. While only few people owned a television at the time, it instantly became clear that the TV would become the biggest new mass medium. The Expo Fairground in Flushing Meadow Park in Queens showed two new imposing landmarks: the Trylon and the Perisphere. With 63 participating nations, the fair and its architecture were modern and futuristic. New technologies and consumer goods such as the FM radio, fluorescent lighting, and nylon stockings were among the Fair’s success stories.
#NYC ‪#NewYork #WorldsFair #Vintage #Poster #VintagePosters #VintagePoster https://goo.gl/YC5rQA  https://goo.gl/GXcrV8