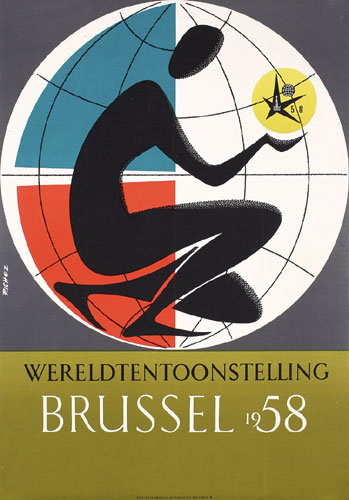 Today in History: Expo in Brussels
Belgian King Baudouin I opened the first World’s Fair after the Second World War in Brussels, Belgium. The exhibit’s main themes were innovations in aerospace and nuclear energy. The Expo 1958 was attended by approx. 41 million people. Symbol of the fair was the “Atomium,” a 102 meter (335 ft.) model of an iron molecule. The Soviet Union introduced a model of the first Soviet satellite, a facsimile of Sputnik, which was regarded as a direct insult to the United States during the time of the Cold War. The satellite disappeared mysteriously during the fair and the Soviets accused the US of stealing it. The United States in turn was planning on constructing a nuclear power plant on the exhibition grounds, close to the city center and the Royal Palace. The Belgian King intervened and asked that the power plant be built at a different location.
#WorldsFair ‪#Brussels #Poster #VintagePosters #VintagePoster https://goo.gl/YC5rQA  https://goo.gl/GXcrV8