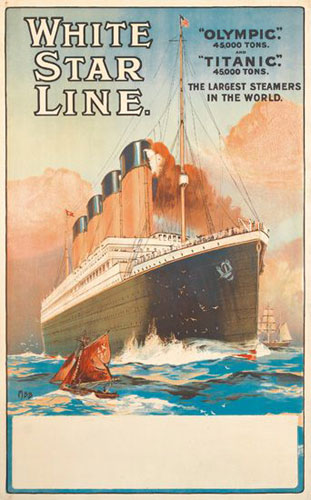 Today in History: “Unsinkable” Titanic sinks in 1912
April 15 marks the 104th anniversary of the Titanic disaster. On this day the passenger ship RMS Titanic sank into the icy water of the North Atlantic. Built by White Star Line to be the largest, fastest and most luxurious cruise ship in the world, the Titanic was regarded as unsinkable due to its individual watertight compartments. However, on its maiden voyage from Southampton, England to New York, the ship hit an iceberg. On April 14 at 11:40 pm, the collision ripped open six of the ship’s compartments – the Titanic was designed to withstand no more than four compartments flooding. The ship which took three years to build would sink in less than three hours. At 2:20 am on April 15, the Titanic sank. The cruise ship carried 2,206 passengers, including a crew of 898. There were only enough life boats for 1,200 of them. In the end, over 1,500 people died in the tragic accident.
#Titanic ‪#Vintage #Poster #VintagePosters #VintagePoster https://goo.gl/YC5rQA  https://goo.gl/GXcrV8