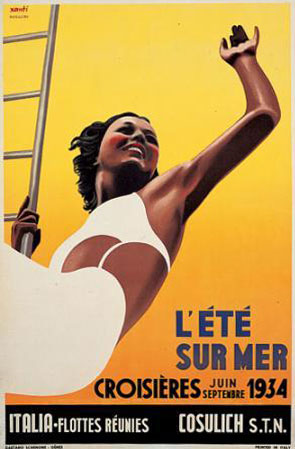 Today on History: Alexander “Xanti” Schawinsky” born in 1904
Happy Birthday, Alexander “Xanti” Schawinsky. The Swiss born artist would have turned 112 today. After studying in a German architectural office, he joined the Bauhaus School of Design in 1924 where he studied with Kandinsky, Klee, Moholy-Nagy and other Bauhaus Masters. He was primarily involved with the school’s theater department while also concentrating on photography and painting. Facing Nazi persecution, Schawinsky took refuge in Switzerland in 1933 and then moved to Italy to work for Motta, Olivetti, Studio Boggeri and other prominent clients. In 1936 he emigrated to the United States where he taught art and design under Joseph Albers and later worked with Walter Gropius and Marcel Breuer.
#Schawinsky ‪#Vintage #Poster #PosterArt #VintagePosters #VintagePoster https://goo.gl/YC5rQA https://goo.gl/GXcrV8