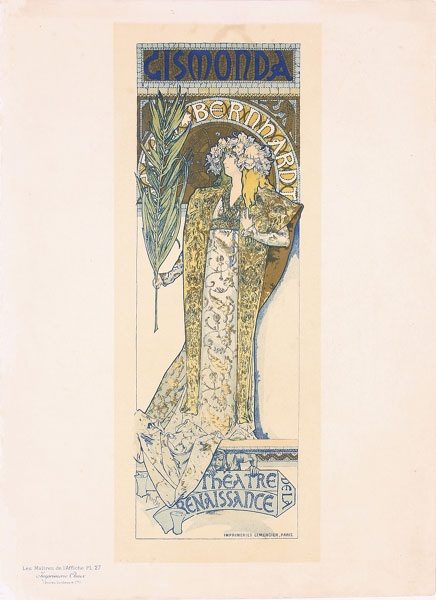 Today in History: 155th Birthday of Alphonse Maria Mucha (1860 – 1939)
The talented Czech Art Nouveau poster artist, illustrator and designer was born on this day in 1860. Mucha initially worked as a theatrical scene painter in Vienna before a benefactor discovered his talents and financed his art studies in Munich and Paris. Mucha stayed in Paris where he designed his first posters. His breakthrough came in 1894 when he created the famous Gismonda poster starring Sarah Bernhardt. The actress was so impressed with Mucha’s work that she offered him a 6-year contract which paved the road for the artist’s subsequent success. Over the next 15 years, Mucha became the model Art Nouveau artist, creating posters, advertisements, calendars, postcards, and magazine and book illustrations. His work typically featured beautiful women surrounded by elaborate flowers. Mucha returned to live in Czechoslovakia around 1910 where he produced his masterpiece, a set of 20 mural paintings, the Slav Epic, depicting the history of his nation. He died in 1939, several months after being arrested and interrogated by the Nazis, following Germany’s occupation of Czechoslovakia.
#Mucha #ArtNouveau #AlphonseMucha #PosterArt #VintagePoster #VintagePosters https://goo.gl/YC5rQA https://goo.gl/GXcrV8