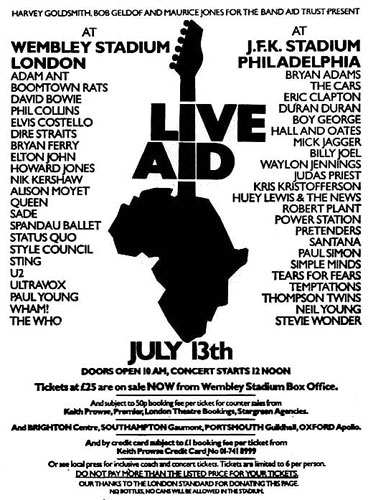 Today in History: Live Aid
40 years ago today, the global rock concert Live Aid opened. The event was held simultaneously at London’s Wembley Stadium as well as Philadelphia’s John F. Kennedy Stadium. It was organized by musicians Bob Geldorf and Midge Ure to raise money for the relief of famine-stricken Africa. On the same day, concerts inspired by the project took place in other arenas around the world, including Australia and Germany. The 16-hour super concert was one of the largest satellite-linked and television broadcasts of all time with an estimated global audience of 1.9 billion across 150 nations.
#LiveAid #PosterArt #VintagePoster #VintagePosters https://goo.gl/YC5rQA https://goo.gl/GXcrV8